Using your Potentiser
The first class many take after the Beginner/Refresher class is the Potentising Class.  This is usually Day 3 of our Winter Classic.  Ed Kelly describes potentising as simply as anyone I have heard.  He teaches it is a way of recording what is in the well and on the dials for future use.  Much like an audio or video recording.

I am not going into the mechanical details of how the Potentiser or Replicator function, but I will go into some of the uses that you may not have considered before.

Likewise, if you have two reagents then you can broadcast both at the same time and still add 2 additional rates from your personal unit banks.

The Potentiser also gives you the capability to build reagents that have more banks than you are able to broadcast all at once.  If you want to use a 3-bank rate. You can potentise 2 banks into a reagent and then potentise the 3rd into it.  Now you have a three-bank reagent even though you only have a 2 bank instrument.

For instance, suppose someone has a runny nose.  Take a sample of the discharge (usually on a tissue). Place it in the sample well and place a glass of water in the Potentiser well.  then in order to make a remedy, dowse to see if it would be in-phase or out-of-phase and potentise the water.  Now you have a remedy of the cold….

Or for someone allergic to foods of different sorts, take a food sample and make a remedy.

Taken further, all sorts of candies can be potentised with frequencies.  Everything from vitamins to emotions.  Or maybe you want to suppress your appetite in a sneaky fashion….  Potentise the appropriate frequencies into some candies…..

Maybe you feel like you need the frequency of aspirin, but don’t want the stomach issues that sometimes go with it.  The list is endless and of course includes intoxicants and all sorts of herbs…..

Besides foods, you can potentise frequencies into crystals and almost anything that has carbon.  Your pencil can be potentised with the emotions of love and forgiveness.  How much more powerful would a painting be if it included additional frequencies?  Further, how would a room painted in potentised paint feel?

Maybe make the Living Room feel like the Ho’Oponopono.  Or, peace and restfulness for the bedrooms and something healthy for the kitchen.  Maybe something to repel pests for the outside shed.

Last but certainly not least one of my most popular demonstrations is when we potentise frequencies into flashlight batteries.  Then we use the flashlight to broadcast the frequency.

If you don’t already have a Potentiser you are missing ½ the fun of radionics.  I potentise food, agriculture products, seed and even the decorative rocks along the sidewalk.  Come to think about it, I could potentise the toner for my printer and even the paper itself.

In any case, if you don’t already have a Potentiser of Replicator, get a hold of Ed Kelly at Kelly Research Tech and get yours on order.  If you use it, it will pay for itself in a very short time.

So until next time, keep smiling and dialing! 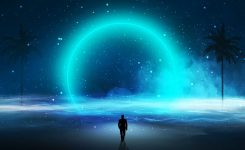